Daemon X Machina hit PC in early 2020, following roughly six months spent as a Nintendo Switch exclusive. It's a third-person mech combat game developed by Marvellous, and while it's definitely worth a shot if you're into anime and mechs, it does get quite repetitive, according to our review.

Soon you'll be able to try it in a stakes-free environment, because it's next week's freebie on the Epic Games Store. It'll be available between January 27 and February 3, and will follow the current Epic Games Store free game, Relicta.

As repetitive as it may be, Daemon X Machina has a lot going for it. For those who miss From Software's Armored Core series, this is probably the closest you'll get for a while. It was produced by Armored Core veteran Kenichiro Tsukuda, and while it's decidedly more colourful than From's old mech series, Daemon X Machina definitely inherits some of its feel.

"Daemon X Machina is approachable enough to appeal to those with no previous experience with mech games," Chris Scullion wrote in his review. "Controlling your mech takes one or two missions to get used to, but it soon clicks: flying is toggled on and off with taps of the jump button, the triggers handle your various weapons, the D-pad allows you to swap out different firearms on the fly."

Speaking of robot-on-robot violence, it looks like From Software's Armored Core may be making a comeback, with Hidetaka Miyazaki at the helm. According to Mollie's report, the boss battles will be "Soulsy" and the architecture will be vast, while still retaining the old (read: extremely gray) Armored Core art style. 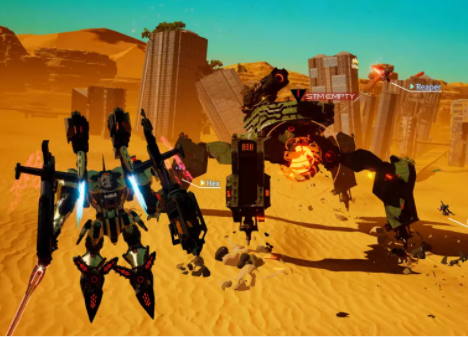